The End of a Mid-Winter Night’s Dream

The holidays are a whirlwind.  I can’t decide if I forget who I really am, or find who I really am during that period of time.  It’s a foggy place.  In one sense, I never feel more like myself from that slumber from the real world that occurs every December.  I get to just be Lorna Caye, around only my closest friends and family.  I go back to the basics, and just become the girl I was growing up.  I get to live in some sort of yester-year.

On the other hand, I feel like I lose something over the holidays.  Things around me vanish, and though I get a break from the grind, I don’t feel quite normal.  It’s almost like going into another place, like Shakespeare takes his characters in A Midsummer Night’s Dream, where everything is dancing in a twilight zone.  Is it the past, the present?  The holidays are a little bit surreal, by making me think of people I never think about, or by going to places I never go.  It brings the dead back to life, and rehashes fires burned out long ago.  However, this fantasy world we fall into, decorated in tinsel, and smelling of cinnamon and sausage balls, might be our parallel universe where we can get some peace for a moment.  A strange, mostly happy peace.

We can’t stay there, though.  In the long run, I don’t think we’d even want to.  It’s the place that is so comfortable we don’t hunger, and here on Earth, while we still wear skin for dress, hunger is something we like.  Eleven months out of the year we like to search and scramble for the things that make us who we cannot help but be.  This month that occurs, that is the most wonderful time of the year, leaves behind a bit of flailing.  What was that world we were a part of prior to Thanksgiving?

I think I returned to Lornaland, meaning the one I dance in from January to November sometime yesterday morning.  I suddenly shook the snow out of my eyelashes, and stood up out of my makeshift bed of holly.  My mind went to my blog again, thinking of all the things I needed to share with the world.  I was grumbling again from somewhere inside.  Over the holidays, I hate to admit, the writer in me shut up.  It packed up it’s fountain pen and watched me from afar while I went to the land of colored ribbon, and candy canes.

I started feeling myself come back yesterday morning when I heard the song, “Wicked Games,” by Chris Isaaks.  That song always makes me breathe in phantom coconut oil, and transports me to a beach where people dance half-naked in the nearby crowded streets.  I start sweating immediately, and go Scarlet O’Hara dramatic.  I throw myself on my couch, searching the t.v. for something that can bring me closer to my fantasy.  I start praying to God the movie Cocktail is on somewhere.

The writer re-enters with a raised eyebrow, “there you are, you desperate thing…desperate for the perfect atmosphere, the perfect story.” .

“Don’t patronize me,”  I reply, pretending to sip a rum-runner that’s actually a bottled water with orange Mio added in.

“I have some new stuff for you about that Jenna Lee Ravenel character you thought up a month ago.  You’re gonna love it.  She’s more sultry than ever,”  the writer teases.

As Shakespeare says in A Midsummer Night’s Dream, “though she be but little, she is fierce”.  With a pen, that I am. 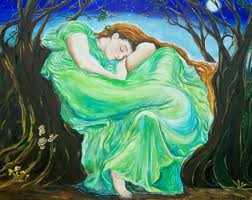 “If we shadows have offended,
Think but this, and all is mended,
That you have but slumbered here
While these visions did appear.”