Writing is a hard, hard, thing to be in love with.  To actually sign a great agent, have a book sold at auction, get a great editor, or see any materialization from the labor is far-fetched.  Writers have to believe in long shots going in, nothing but net, in the ninth hour.  We have to believe in exceptions to every rule, records being broken, and pots of gold at the ends of rainbows.  We have no choice but to believe in leprechauns and unicorns, centaurs and demigods.  If we don’t, then what do we have?  A mental condition, maybe?

Last night when my heart was pounding out of my chest while I watched game 7 of the NBA finals, I saw a centaur leading a supportive cast of unicorns.  I saw beings that were supposed to be men, find the animal, the regality, the x factor inside, and defy statistics, odds, and wrathful warriors to become champions.  I saw a man of 6’8, 250, morph into a beast of immeasurable proportions.  I saw his teammates grow wings, and fly. I saw a labor of love and passion begin to spin, snowball, and catch on fire.  I saw a city who hadn’t seen a victory in over 50 years  finally get to celebrate the fruitions of faith.  I saw a team become the first in history to ever deliver that victory from such a deficit.  I saw a group of players become more fierce when 99% of people out there wouldn’t have seen the point of stepping up, and would be ready just to try again next time.  They were down 3 games to 1, with 4 needed to win.  They were in an arm wrestling match with their knuckles almost touching the table.

As a writer, I feel like it’s part of my job title to inspire people, to give them a reason to hope, to make their next breath worth while.  We’re the dreamers, the innovators.  What I realized last night though, is that we need fodder.  We have matches, but have to have some sort of flint to touch that fire to, and start a blaze.  I was given that spark last night by these individuals who didn’t just talk the talk.  They proved it.  They did the impossible, and gave me hope that I can too.  They stepped up and showed me irrefutably that rejection, criticism, and low low odds DO NOT MATTER.  They wrote a memoir that I will forever reference when I need to remember how to fight.  With every jump shot, free throw, impossible block, and wood-burnt elbow sliding across the floor, these men wrote a story that I’ve been moved to put words with.  It is them, running, sweating, and dribbling all over my keyboard right now.

What I’m saying to the Cavaliers is not only congratulations, but THANK YOU.  Oh, thank you from the depths of my weathered writer’s soul.  Cleveland wasn’t the only one dreaming, hoping, needing a sign.  I needed it.  My trench mates needed it. Because of your performance last night, a young writer in South Carolina, no more than 5 feet tall, with manuscripts begging for the shelf time, has hope.  More than hope.  Defiance.  Courage.  Refusal of quitting.  I will play game 7, and I will fight until the buzzer sounds because YOU did.   What you’ve done doesn’t end on the court.  Your tears of joy have filled the building, swollen it to capacity, and now seep out.  Your dauntlessness has spilled onto the nation, and it’s a tidal wave.  Hold hands and take your bow, enjoy your title…the rest of us have some work to tend.  I hope when mine is done I will cry Cleveland tears, the ones that still stain the Golden State arena today.  I hope I will cry the tears that only come when daring to be great, the tears that only come when achieving the impossible dream, the tears that come from pure uninhabited need for greatness. 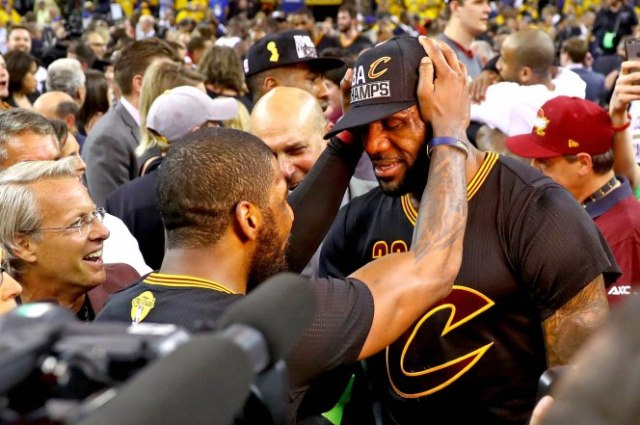